Haiti: Freedom and Creativity from the Mountains to the Sea 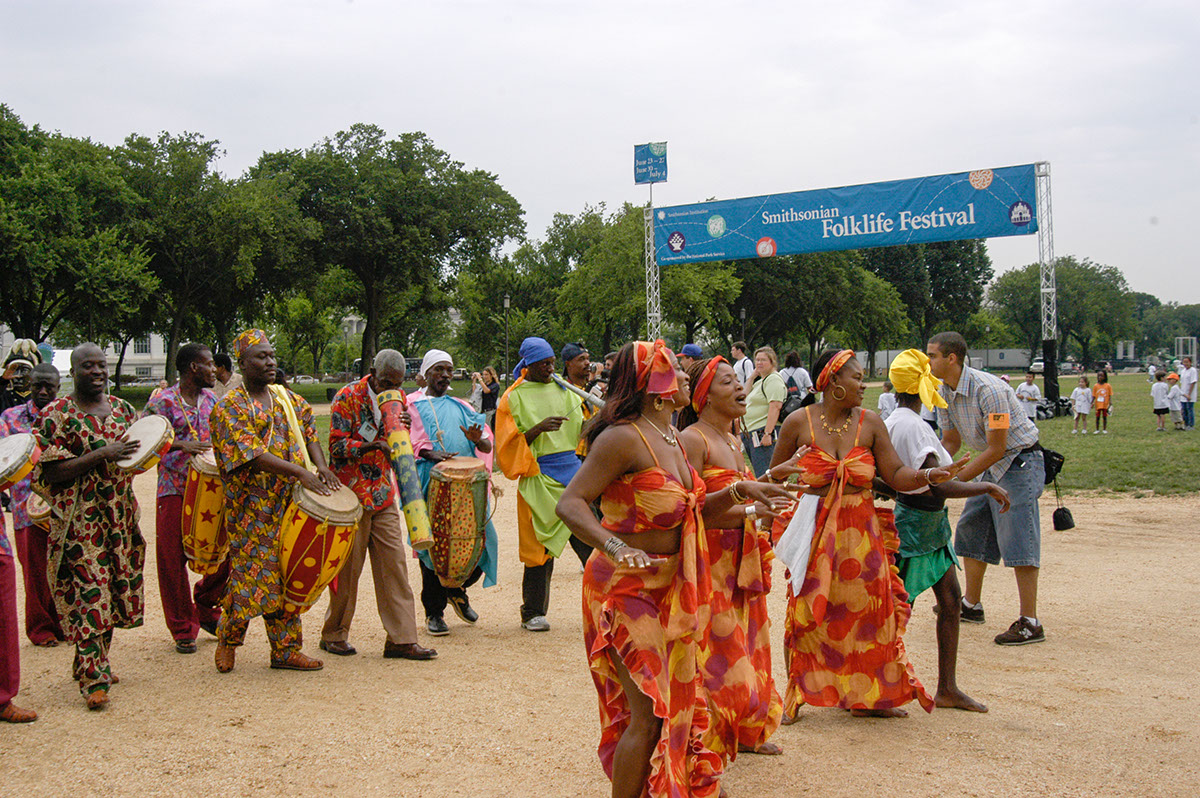 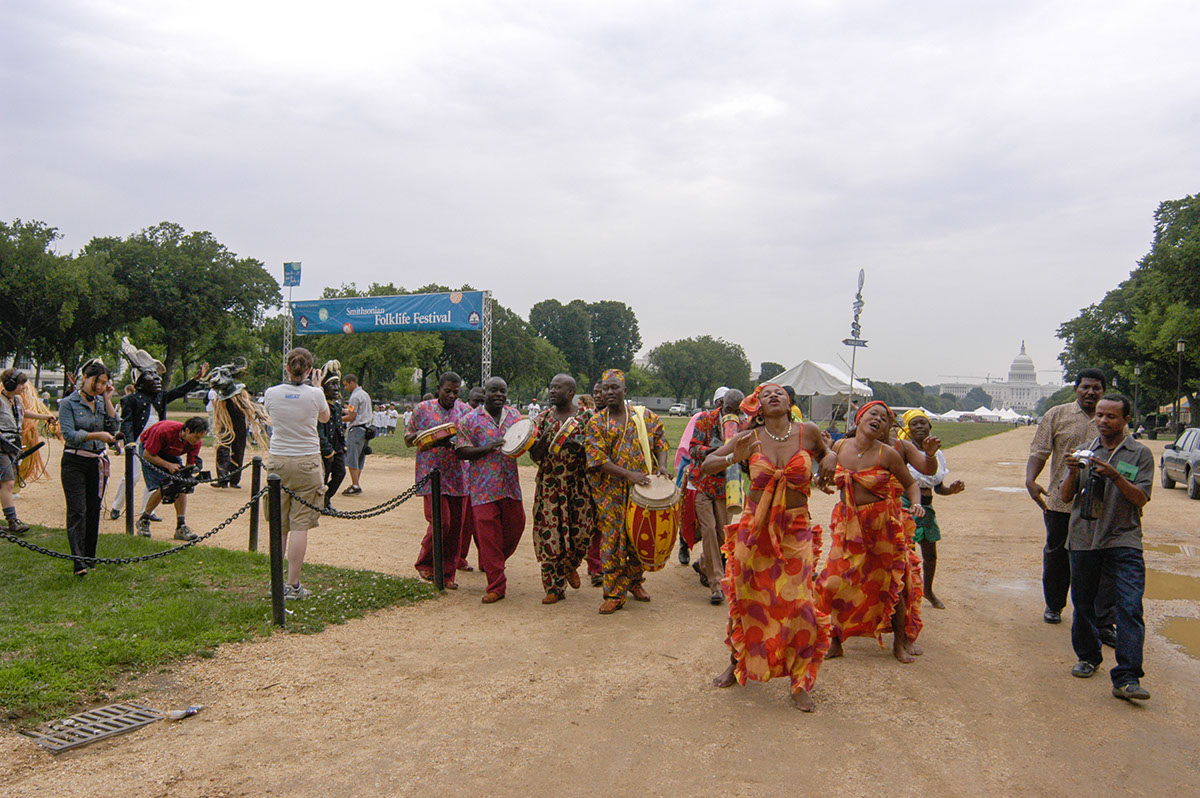 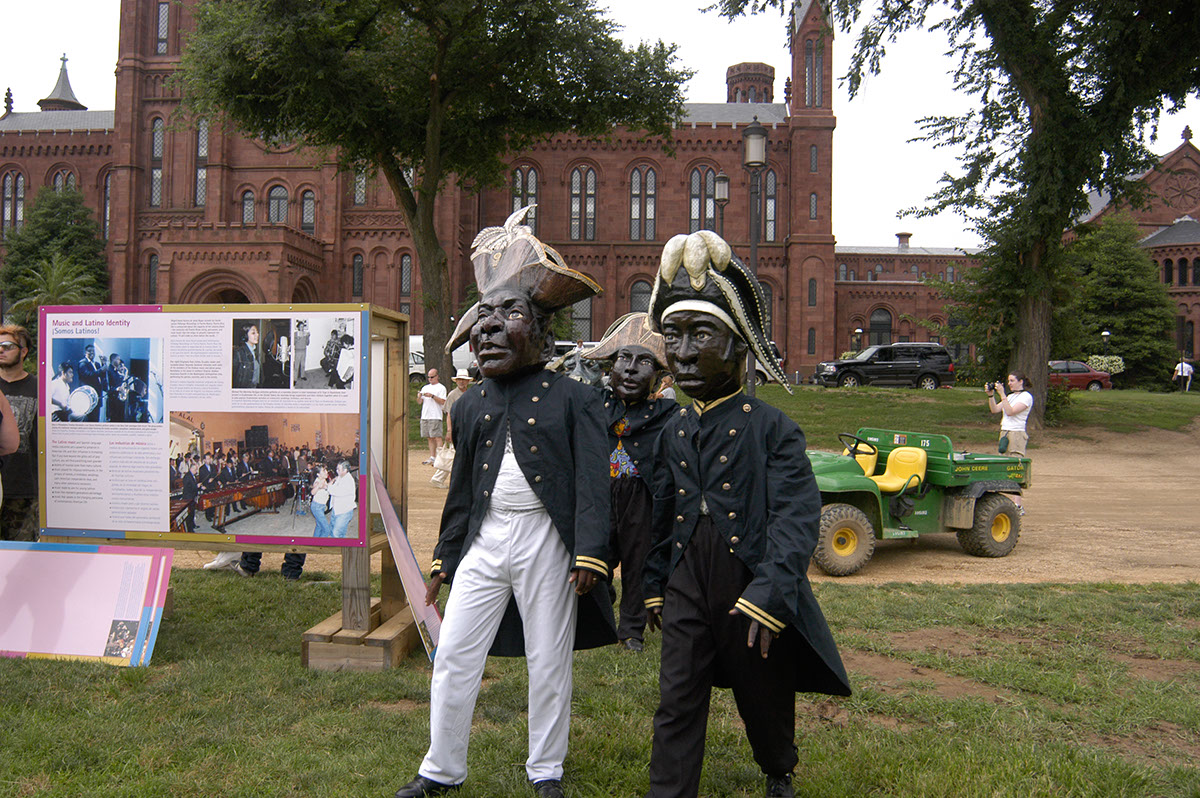 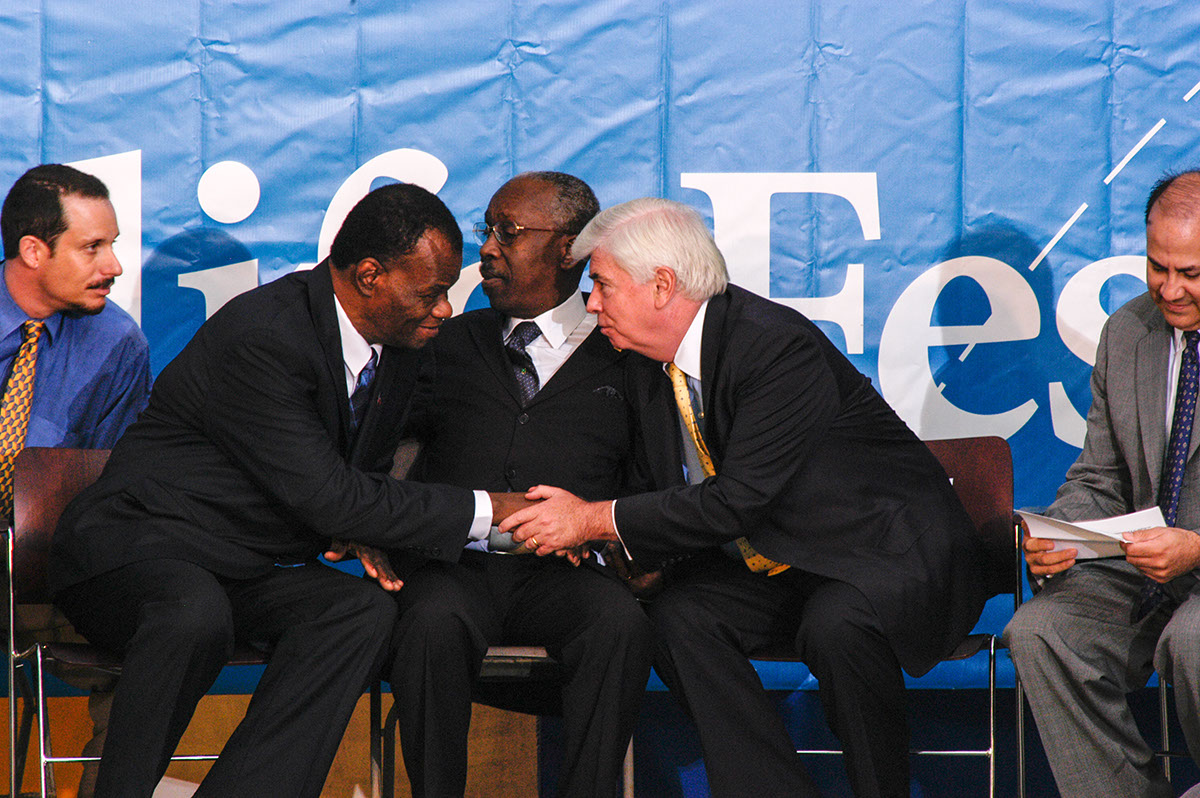 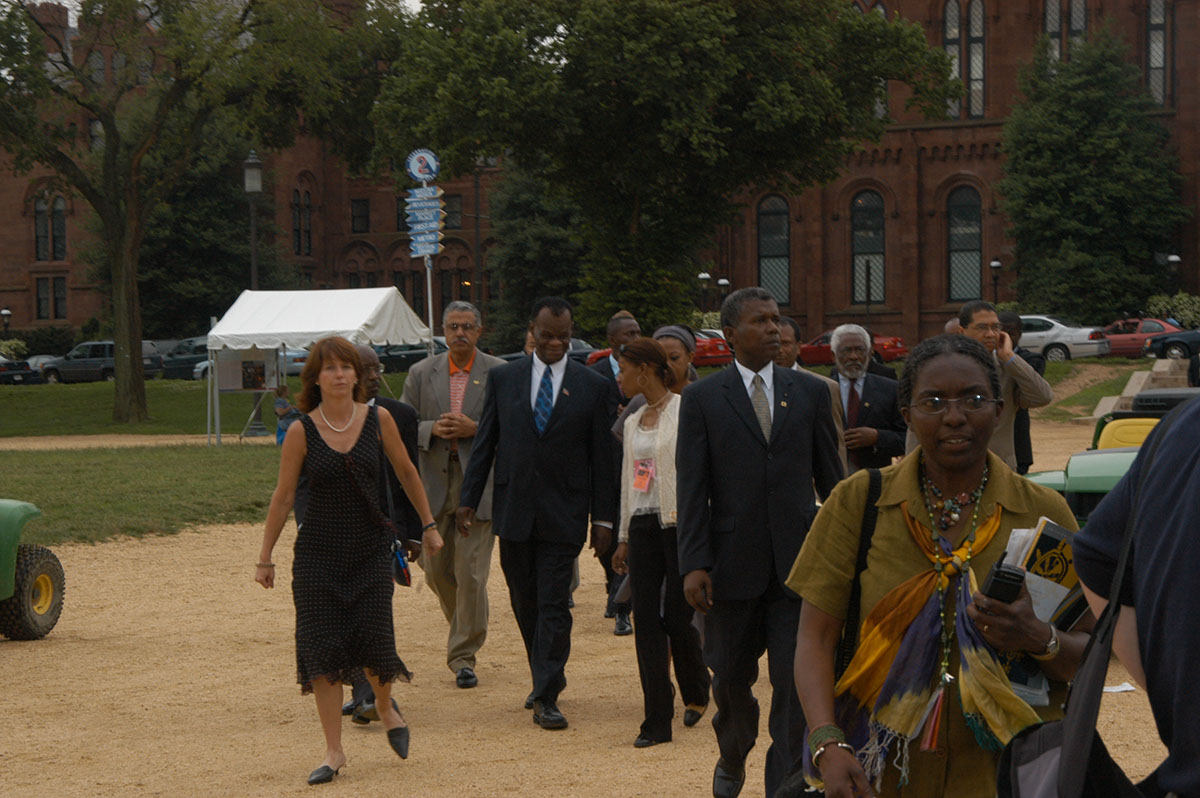 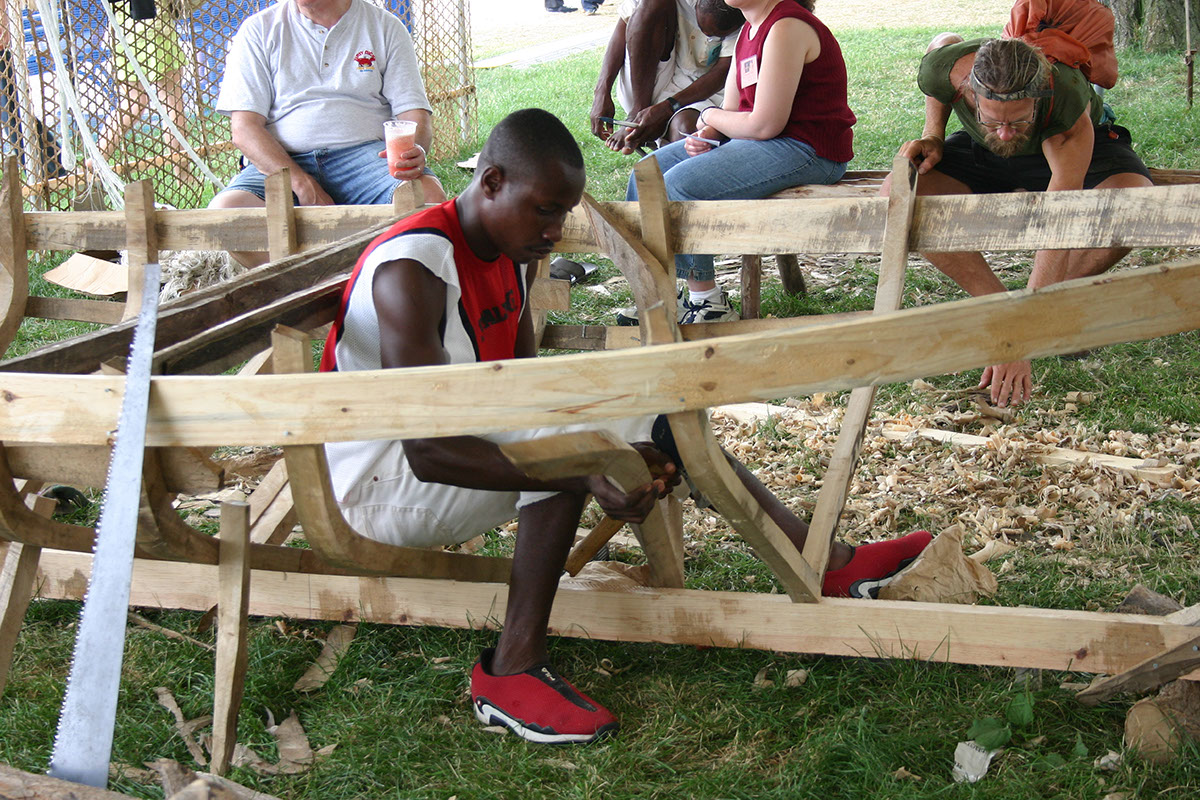 Haiti has long been beset with grave problems - and a few years after the 2004 Festival it would suffer the devastating earthquake of 2010. But Haitians' love of freedom nevertheless inspires them and nurtures their imaginations. Despite and often because of the challenges they have continued to face, Haitians create powerful artistic expressions in music, painting, crafts, sculpture, and architecture; in religion; and in language. The encounter ofTaino and African cultures, along with that of European colonizers, gave birth to the dynamic Creole culture that defines Haiti today. As a result, Haiti is one of the richest nations in terms of its culture and its people. Through the voices and creations of her people, that indefatigable and ever-resourceful spirit of creativity and resilience was celebrated at the Festival during Haiti's bicentennial year of 2004.

The creativity at the root of Haiti's heritage has been and continues to be expressed in many ways. In the visual and plastic arts, creativity may actually arise as the result of the distressed circumstances in which many people live. Thus, very often Haitian artists and craftspeople transform and restore life to things others throw away, like old carburetors, bent cooking utensils, or empty plastic juice bottles. It is that quest for new materials and forms that liberates their creativity, and, in turn, it is that creativity that validates their freedom.

Craftsmanship was one of the few dynamic sectors of Haiti's economy at the time of the Festival. In the city of Jacmel, for example, an especially vibrant and viable activity is the craft of papier-mache. Originally used to create elaborate and breathtaking masks for the traditional Carnival, papier-mache has become a veritable industry with artisans making mirrors, place mats, bowls, furniture, and other utilitarian as well as decorative products. Basketry and other straw work are also important commercial activities. Influenced by indigenous, African, and European traditions, products vary around the country, depending on the types of fiber that are available and the needs of consumers. Like weaving, woodcarving is an ancient art form drawing on Native, African, and European traditions. With certain species of trees such as cedar and mahogany disappearing, the supply of raw materials has dramatically decreased, but craftspeople continue to work. Carved stone frames, candlesticks, bowls, and trays are sold in craft shops. Areas that are rich in clay produce pottery. Such crafts were demonstrated at the Festival by skilled craftspeople, and the Festival Marketplace highlighted a number of local development projects in the craft sector.

The music of Haiti is a creolized music - like so much else in Haiti it is a synthesis of Taino, African, and European music created out of often violent encounters. The guido, a grated gourd scraped to create sound, the conch shell, and the rattle, still used in Haitian ritual music, are reminders of the music of Haiti's original Taino settlers. Their music, infused throughout the Caribbean, found willing company in the drumming vocabularies imported from West and Central Africa and perpetuated in the mountain enclaves where liberated Taino and African descendants (maroons) shared a mutual aversion to slavery and communicated ideas about the composition of the world beyond what was visible to the eye. Specific African sources of Haitian music and dance are most recognizable in the sacred music traditions of Vodou. Several drums, rhythms, and forms of ritual dance are named after their presumed origins on the African continent - rite Congo, rite Ibo, rite Rada (Yoruba or Fon), rite Senegal. Festival visitors had the opportunity to encounter these diverse traditions first-hand in an ounfò or ritual temple.

In addition to their long-term engagement with conserving Haiti's built heritage, Haitian architects and preservationists have begun to document people's ingenious applications of vernacular architecture's principles in urban areas to cope with overpopulation, pollution, and other difficult social and economic conditions. The recycling of materials such as old tires and plastic cups for use as flowerpots, and the vitality and spontaneity of the urban version of the lakou (yard) seen in Haitian slums, are convincing examples that vernacular architecture will continue to influence the future built environment in Haiti. Photographs and models allowed Festival visitors to understand these ongoing processes, as did custombuilt structures on the Festival site.

In Haiti, Geri Benoit was Commissioner General and Patrick Delatour and Patrick Vilaire were Curators. At the Smithsonian, Diana Baird N'Diaye was Curator, with Olsen Jean Julien as Program Coordinator and Robert Maguire as Curator of Ayiti Cheri (for the Haitian diaspora).

Haiti: Freedom and Creativity from the Mountains to the Sea

January 1, 1804, marked a watershed in world history. For the first time, a revolution by enslaved people, who were of African descent, ended with the creation

A turning point in the Haitian saga of resistance to both physical enslavement and cultural oppression was the 1791 Bwa Kayiman Vodou ritual and political ...