< Previous | Next >
1990 Festival of American Folklife 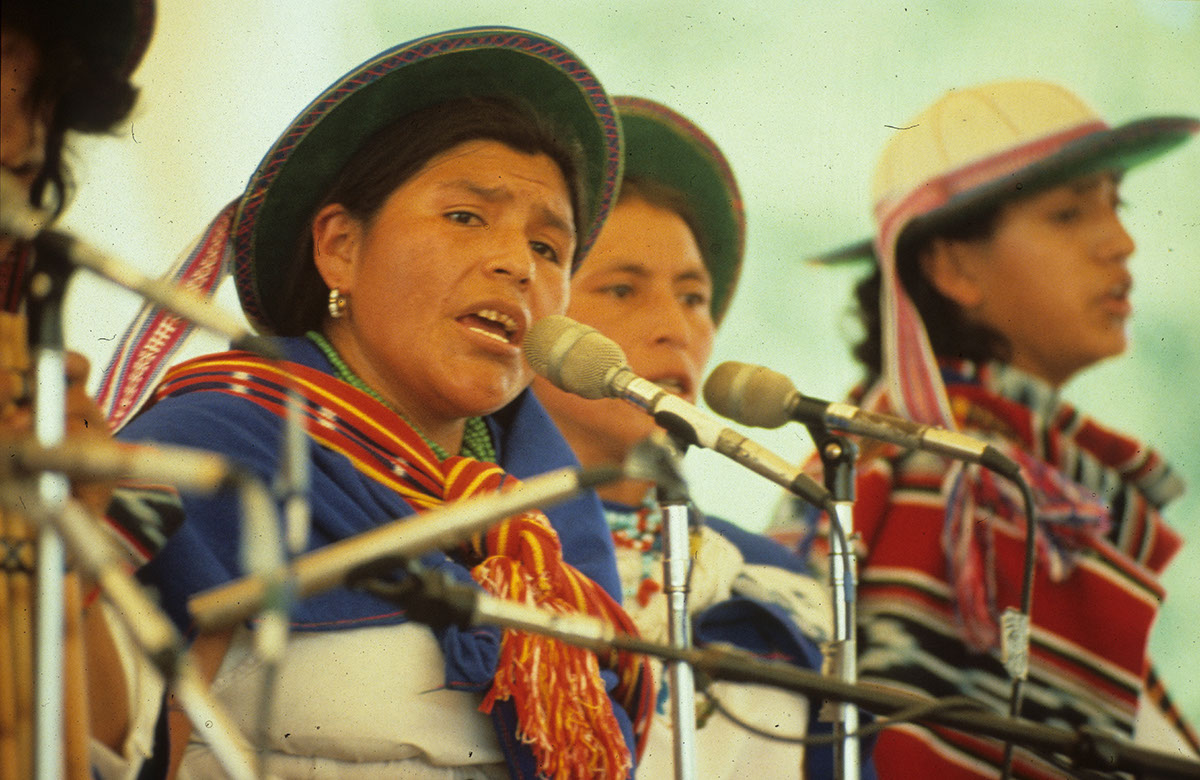 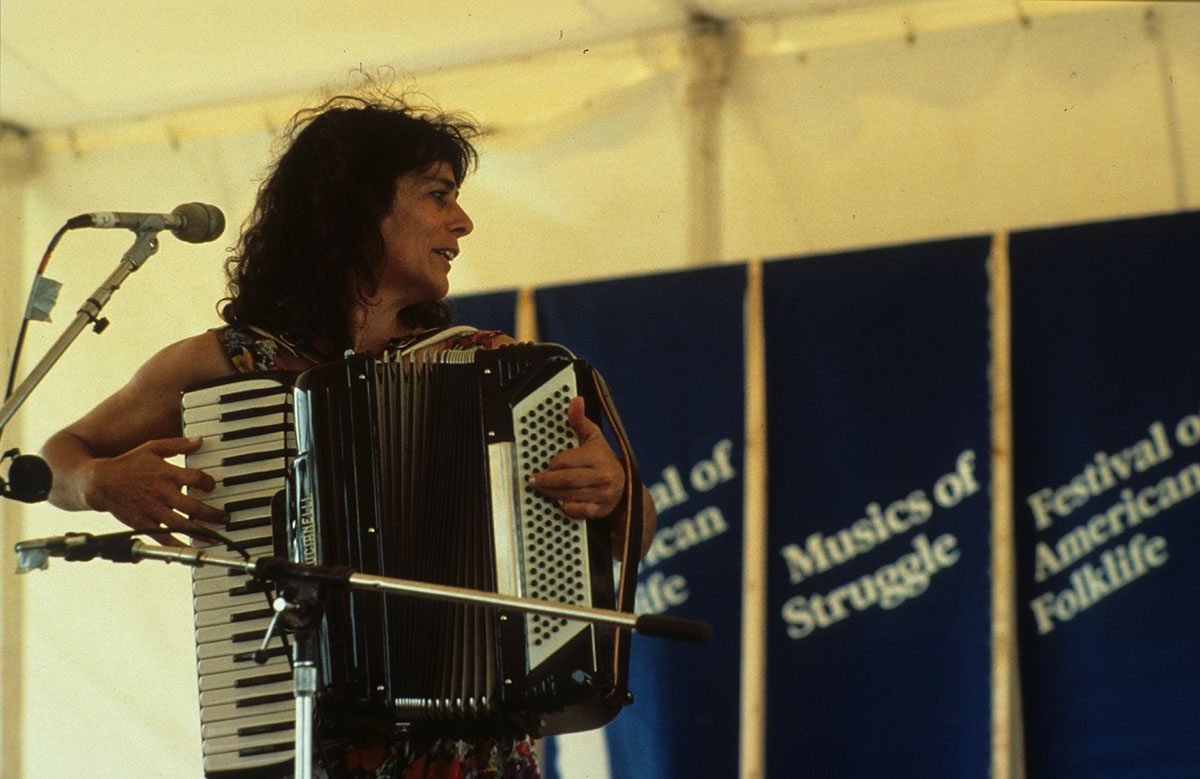 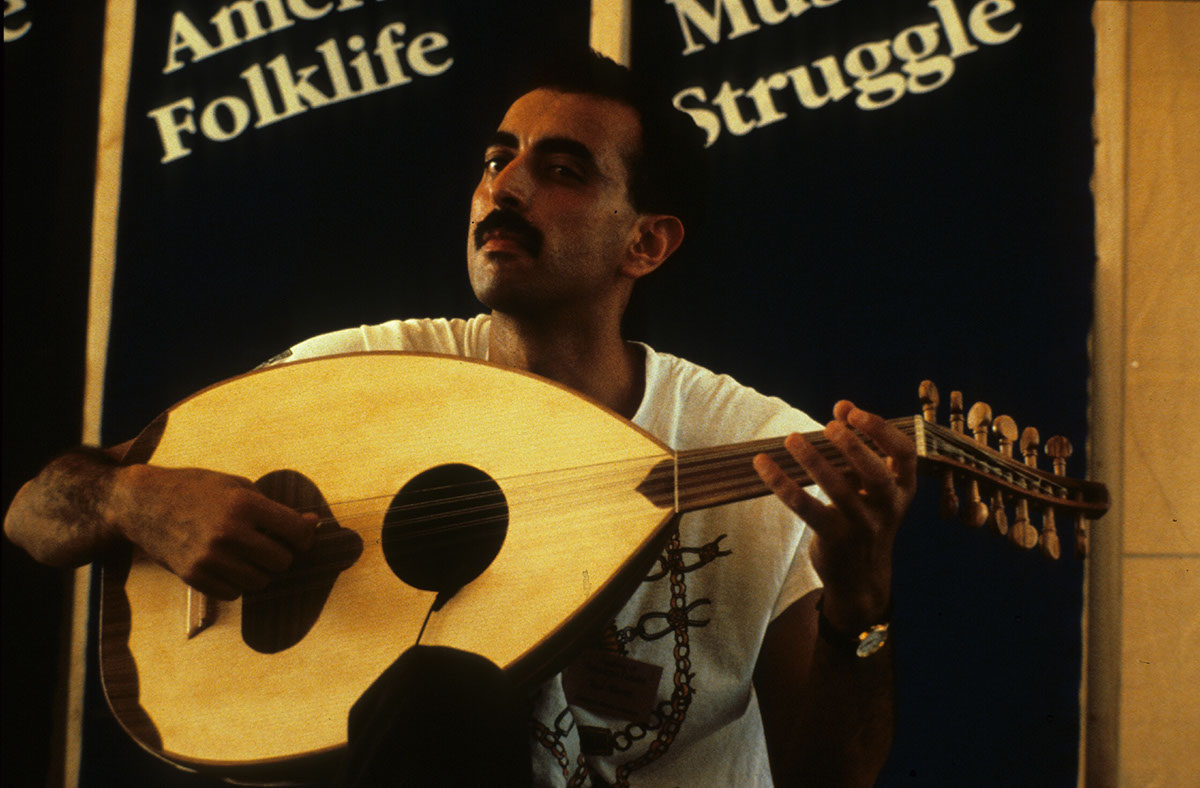 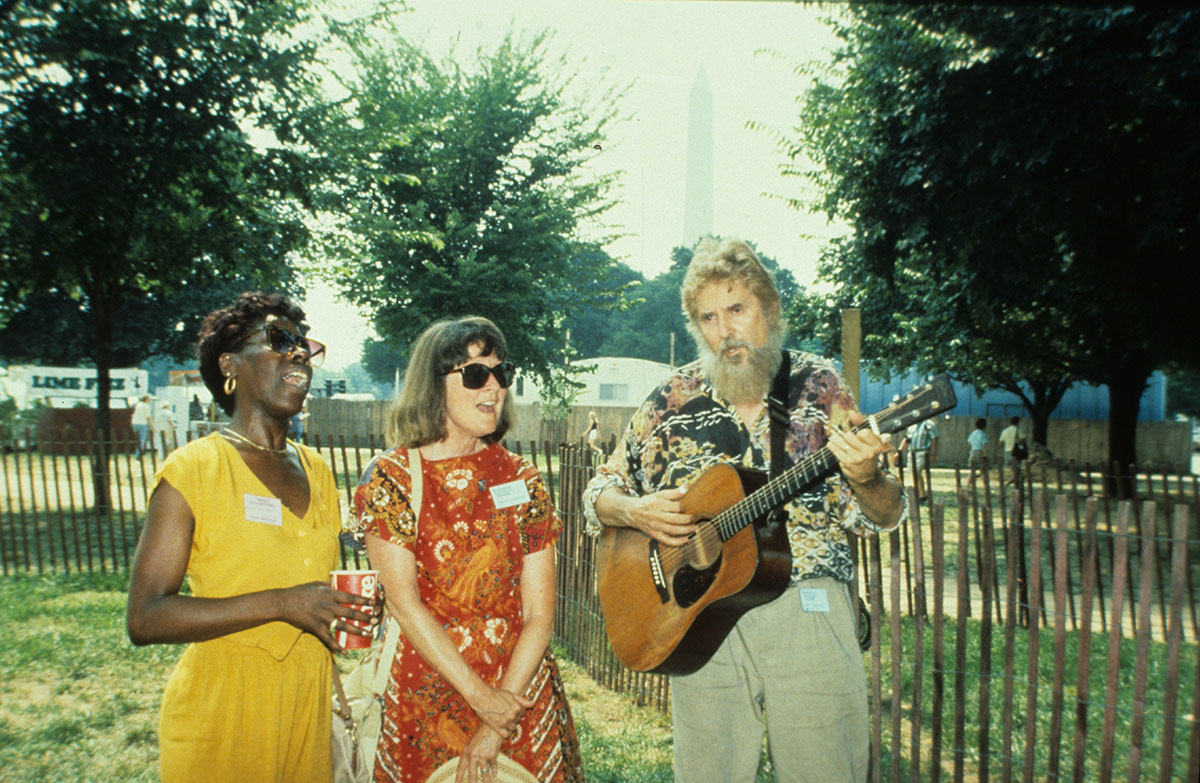 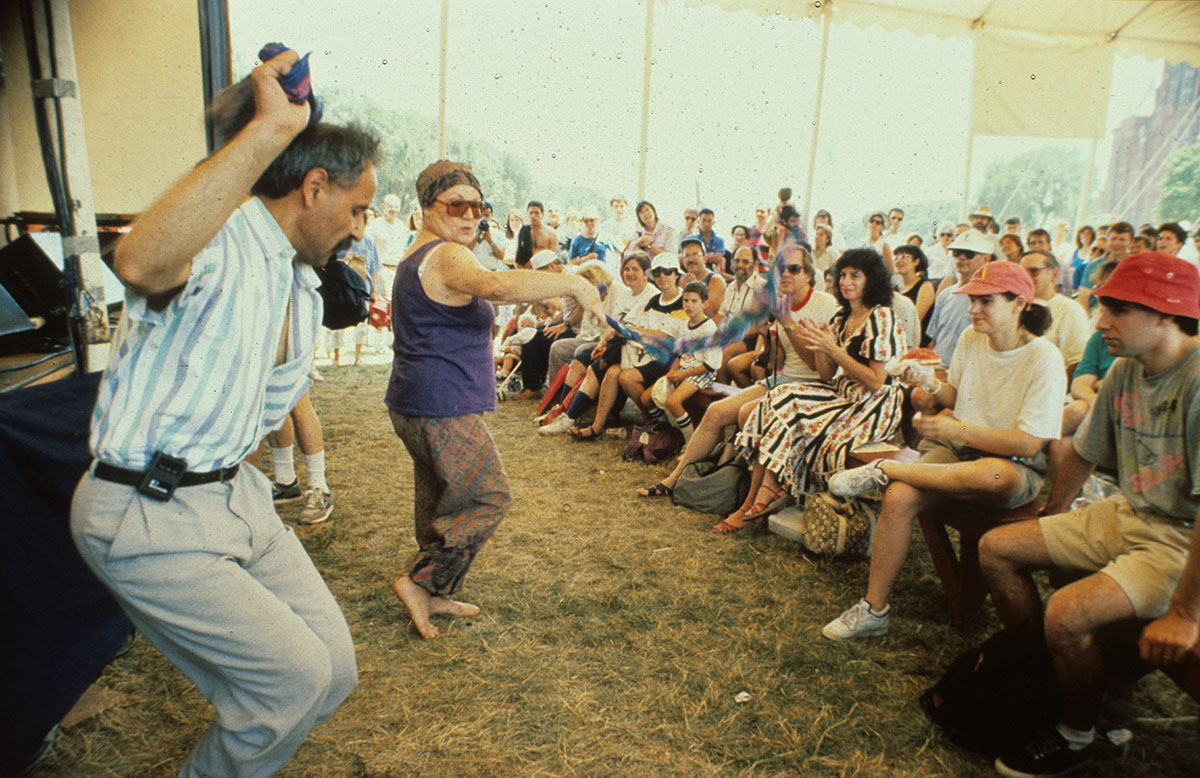 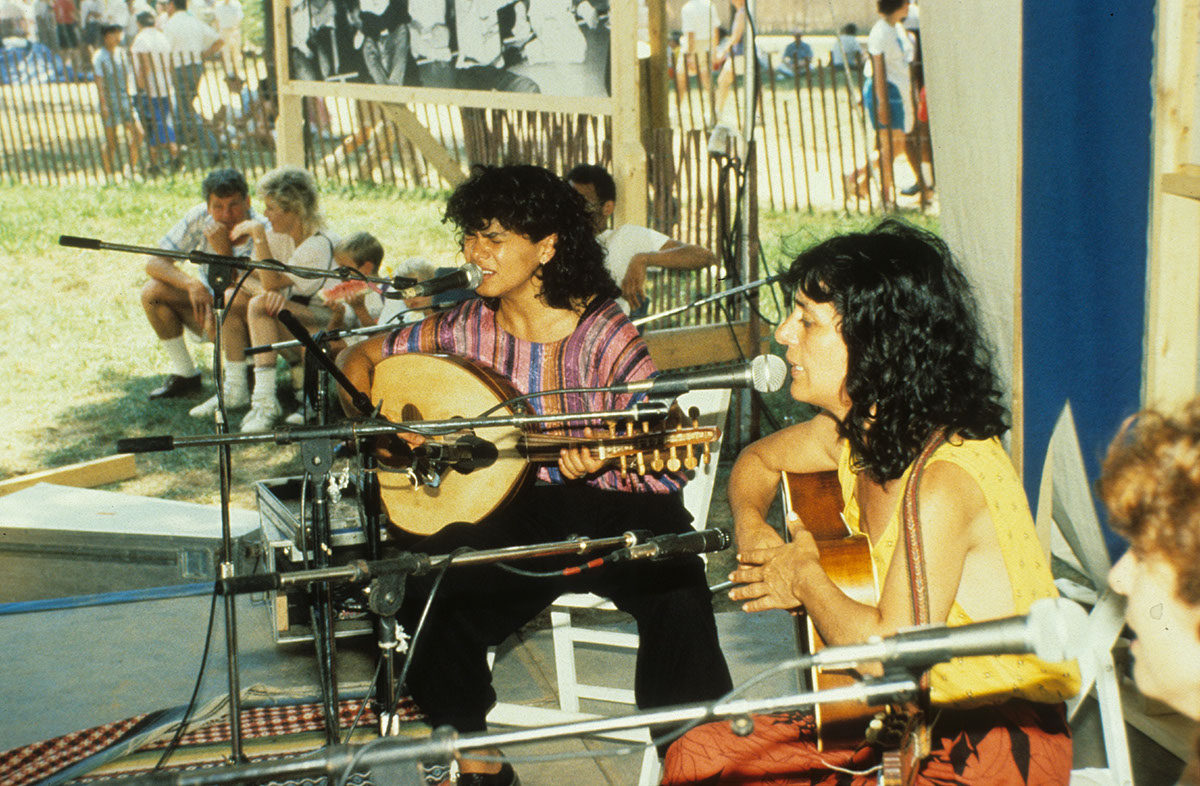 Musical performances can be a part of social movements in a number of different ways. From marked silence through the revival of old musical forms to the composition of new genres, musical performances have both expressed and created feelings of community, have defined central concerns and aspirations, knit small communities together and projected messages to large international audiences. Music can be an effective resource for social movements because of the variety of ways it can be used - with subtlety or bluntness - and its ability to be heard in spite of censorship. Forged, transformed, and even abandoned in the crucible of struggle, music is part of the complex web of sounds and signs with which we experience and make history.

In the Musics of Struggle program, Fesival visitors could learn how different communities, in the United States and abroad, used traditional music, song, chant, and movement to make their voices heard. Recent years had seen profound changes in the social order resulting from mobilizations of popular support. Traditional music had taken on a dramatic, culturally dynamic role in some of these mobilizations. Old songs and tunes newly recontextualized or revalorized provided a link between the continuity of the past and the challenge of the present. Sometimes forgotton was how powerful could be music that articulates a sense of moral purpose and moves a community, a people, or a nation to transform itself. The 1990 program demonstrated just that power to transform, with performances ranging from the songs of the Freedom Singers to the chants, in sign language, of students in Gallaudet's 1988 "Deaf President Now" Movement.

Musics of Struggle was made possible, in part, by the Music Performance Trust Funds, the Inter-American Foundation, and the Arab American Cultural Foundation.

If music were not a powerful resource in social and political struggles it would not be so widely censored, controlled, and surrounded with restrictions. All ...

Songs and Stories of Struggle: Music and Verse as Ethical Discourse

The Greenwich, Connecticut headquarters of the Pittston Company is far from the southwest Virginia coal miners it employs both in miles and in attitude, from ...

Kurdistan—"land of the Kurds"—a fertile area rich in oil, chrome, copper, iron and lignite, occupies an expanse of land only slightly smaller than the state of ...

Since the Dutch first settled at the Cape of Good Hope in 1652, South Africa's bountiful land and mineral riches have been sources of conflict. Over the course

Situated at the crossroad of East and West, the Middle East has been the site of struggle for millenium. For over 3,000 years, the land between the ...

Silence as Protest / Singing an Old Song In New Circumstances

Silence: Not all societies have protest songs. Some use silence. Silence doesn't express much unless everyone else is making noise. But there are some ...

Chimborazo, the 20,000 foot apex of the Andes Mountain range in Ecuador, is an extinct volcano in the center of the country. On this mountain live an indigenous

Some of the most famous songs of struggle in the United States were written during labor conflicts from the mid 19th century up to the present.

The Troubles in Ireland

"The troubles" is the euphemism used in Ireland to refer to the host of problems attending the conflict over British presence in that land. Irish history ...

The San Joaquin Valley of California is a major agricultural center. Its abundant harvests are enjoyed by many Americans unaware of the substandard working and