I loved looking out from my corner of the Al son que me toquen stage at the packed dance floor, where every day exuberant crowds danced in unison to Zully and Leonor’s choreographies, enlivened by the contagious rhythms of La Contundencia. My enjoyment culminated in the band’s impromptu collaboration with the R&B group The Monitors on the last day of the festival. With Dan Sheehey effortlessly facilitating the unrehearsed workshop-style performance in Spanish and English, these musicians shared their instruments and listened attentively to one another as a novel musical sound was born. The natural fusion delighted the audience, moving everyone out of their seats. I felt proud and honored to share in a moment that truly illustrated the universal language of music. Rare are these instances in life when we experience pure joy collectively, among total strangers.

I also found it remarkable how Xiomara’s traditional hair-braiding demonstration drew interest and admiration from an incredibly diverse public, many of them familiar with similar hairstyling and cornrowing techniques despite geographic, cultural and linguistic disparities. For nearly three hours, I watched festival goers watch Xiomara as she methodically reproduced her award-winning design La chirimía chocoana; a hairstyle inspired by the traditional chirimía band of El Choco that featured braided sculptures of the five major musical wind and percussion instruments.

In particular, African-American women in the audience nodded their heads in agreement and understanding as Xiomara answered a constant flow of questions about her hair-braiding process and the materials she uses. The familiarity of her craft fostered a sense of camaraderie that traversed linguistic borders, and by the end of the demonstration several observers had personally invited Xiomara to visit renowned local hair-braiding salons in the D.C. area to exchange styling techniques and ideas. I recognized many of the same faces days later at her second staged demonstration, and by the end of the festival she had gained a fan base!

Click on the image below to enlarge and view the gallery. 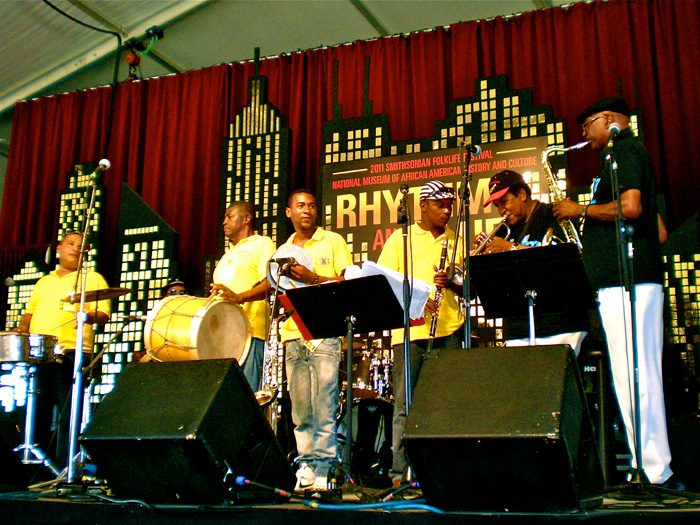 The encounter between the alabao singers from El Choco and the Peace Corps program’s Garifuna participants from Guatemala and Honduras represented another exceptional moment that exemplifies Pharr’s idea. When the Garifuna women saw the alabao performance area set up to emulate a traditional wake in the home with decorative sheets, an altar, a coffin with candles on both sides and images of the saints, they recognized the set-up as nearly identical to their own practices in their respective communities.

They spoke of similarities with respect to funeral rites, festivities and the Catholic tradition of the novena. One visitor observing the interaction commented that the haunting alabaos, sung a capella, were reminiscent of African-American Negro spirituals and certain gospel songs she sings at her church. Cruz Neyla and Fulvia responded that the alabao postures and vocal expressions are rooted in Africa and that for African slaves in Colombia, song was the medium through which they expressed deep sorrow, pain, loss and joy. It was all they had.

The matriarch of the Garifuna collective added that irrespective of nationality, people of African descent share a cultural and historic legacy that continues to inflect contemporary marginalization in Latin America and the United States. Therefore we must use culture and art as a means of preserving oral tradition, combating discrimination and instilling youth with positive conceptualizations of black identity.

Later that afternoon, I thought deeply about how similar folkways and shared African diasporic ancestry had bridged geographic divides among these women so that the chocoanas  and the Garifuna immediately interacted like family, albeit at a formally arranged meeting in a prescribed setting. Yet the natural exchange that took place felt epic and extraordinary. It dawned on me that never before had I participated in a conversation of this nature outside the walls of academia, nor had I ever talked among South American, Central American and North American women exclusively about the historic denigration of Afro-descended populations throughout the Americas. Under different circumstances, this discussion might have been uncomfortable, or it might never have taken place.  However on that day, everyone conversed freely and appeared to derive solidarity from discussing how identity and pride might be re-inscribed through cultural expression.

The festival’s talented participants moved me in many ways, but one particular experience will remain forever etched in my memory. Late one afternoon, a visitor and her young son approached the altar area in the Pacific ecosystem. The area was nearly deserted as the other participants were involved in presentations elsewhere and only Cruz Neyla and I remained.

The visitor inquired about traditional funeral rites in El Choco, and although she was exhausted and hoarse from singing all day, Cruz Neyla obliged the woman and her little boy by quietly singing an alabao.  I had heard a full repertoire of alabaos by that point of the festival and was already familiar with many of the lyrics and melodies.

However, performing alone now, with only the three of us huddled in a semicircle around her, Cruz Neyla quietly sang one simple, melancholy refrain of an alabao that was unfamiliar to me. She then stopped abruptly and did not continue.

Suddenly I felt a knot in my throat rise and swell as a wave of emotion swept over me and I became inundated in profound sorrow. For the first time in my life I began to cry, inexplicably, and despite my shock and confusion I could not stop crying for a long time thereafter. I noticed that Cruz Neyla’s eyes also glistened, and both the woman and her son wiped tears away. All I could manage to utter was “That was such a sad song.” “I know,” whispered Cruz Neyla. “That’s why I don’t like to sing it.”

Later, she explained to me that her mama had passed on only months earlier, and this was the alabao she sang as she held her dying mother in her arms. I doubt I’ll ever manage to fully convey what I felt as she sang that day, softly, heartbreakingly, but with conviction. I was still unaware of the personal significance the lyrics held for her, but through those verses Cruz Neyla transmitted her grief so acutely that it felt like my own in that instant. I once heard that the potency of artistic expression is measured by the ability of the artist to successfully provoke his or her own personal emotional state in the spectator through the creative medium.

The poignancy of being moved to tears by some indescribable quality of her expression and tone helped me grasp the transcendental power of tradition bearers such as Cruz Neyla. They command their craft as true artists and play a vital role in communicating the spectrum of human emotions, thereby maintaining the social and spiritual wellbeing of their communities.

I began the Folklife Festival with the expectation that through our program, visitors would learn about Colombia’s rich cultural heritage and appreciate how culture interacts with the natural environment. In the end, I understood the outcome of this event as far more complex and multi-dimensional.

Through meaningful interactions and sensorial learning experiences, the festival presented Colombia in a way that allowed us all to see aspects of ourselves in others, and vice versa. In other words, it encouraged everyone to focus on our common humanity as opposed to national differences, thus promoting cultural continuity across time and space and creating manifold, far-reaching possibilities for global communities to come together, and for lifelong friendships to develop.

Click on the image below to enlarge and view the gallery. 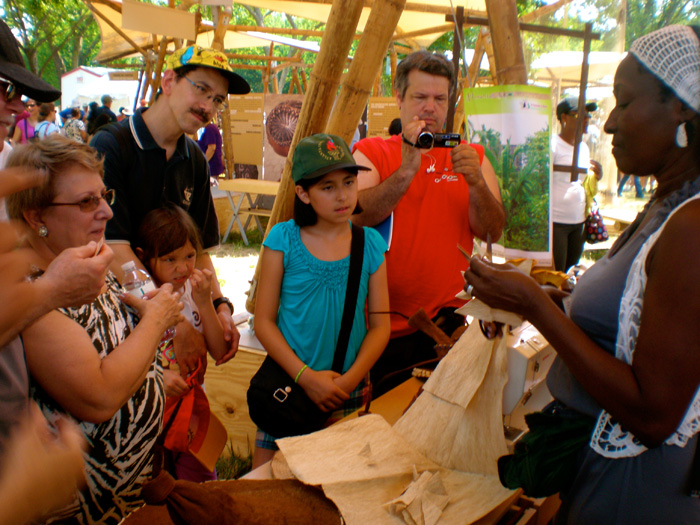 Kiley Guyton Acosta is a doctoral candidate in Caribbean and Brazilian Literature at the University of New Mexico with concentrations in Afro-Cuban and Dominican Diaspora women’s writing. An advocate of local and trans-national cultural arts programs, she seeks novel and innovative ways of integrating scholarship, teaching and activism to explore cultural products as vital resources for preserving cultural heritage and exploring identity. Kiley was a member of the curatorial team for the 2011 Smithsonian Folklife Festival’ s Colombia program and also works as a liaison for the Afro-Latino Archives Project.