It took months for the curatorial staff to decide what tag line to use with the title of the Hawai‘i program at the 1989 Smithsonian Festival of American Folklife (now the Smithsonian Folklife Festival). Their final decision? Don’t use one; the program would simply be called “Hawai‘i.” In the process of researching this program, the organizers realized that any addition to the title could easily limit and misrepresent a program about this wonderfully complicated State. 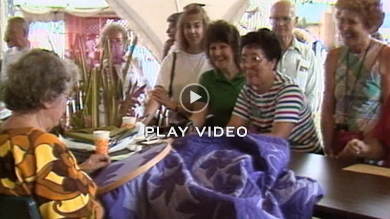 The Festival was produced by Bart Fredo and PBS Hawai‘i in 1989. The film is narrated by Nalani Eilson-Ku and includes interviews and performances recorded at the Smithsonian Folklife Festival in Washington, D.C., and in Hawai‘i. Courtesy of PBS Hawai‘i; special thanks to Roberta Wong Murray

The Hawai‘i State Foundation on Culture and the Arts decided to celebrate the 30th anniversary of statehood, in part, with a Festival on the National Mall in Washington, D.C. The decision was particularly charged in the context of identity politics of the 1980s, a time when some Hawaiians questioned the value of statehood and others even championed independence and the establishment of a sovereign kingdom. The cultural renaissance of the 1970s had unearthed a variety of fissures between communities, and the lauded success of cultural diversity in the islands was, and remains, in question. In this environment, the Smithsonian Festival team began by asking local organizers a simple nevertheless challenging question: if you have only one hundred people to represent the traditions of Hawai‘i, who would they be? 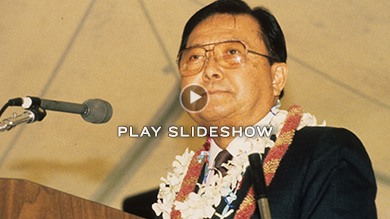 The Hawai‘i program was also developed at a time when the Smithsonian Office of Folklife Programs (now the Center for Folklife and Cultural Heritage) was committed to broadening the involvement of local communities in the Festival process, particularly in its research phase. More than forty local scholars, community activists, and practitioners in Hawai‘i were identified to carry out research in preparation for the Festival. Over a six month period, these researchers created an archive of material that led to the selection of more than one hundred artists from nine ethnic communities living on every island in the state: Puerto Rican Kachi-kachi musicians; Hawaiian chanters; an outrigger canoe builder; an Okinawan textile weaver; a taro farmer; a Portuguese forno cook, etc. That archive, copies of which are now at the Smithsonian and the University of Hawai‘i, provides a snapshot of Hawai‘i in the late 1980s. 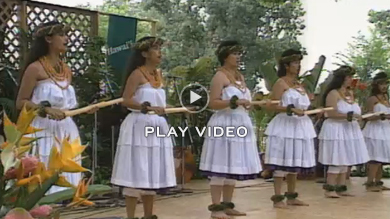 Celebrating Hawaii's Cultures was produced by Juniroa Productions in 1989. The video is narrated by Honolulu Skylark. Producers Heather Giugni and Lurline McGregor created it from material recorded entirely on the grounds of the Smithsonian Folklife Festival in Washington, D.C., and the credit roll provides a list of all the crafts people who participated in the 1989 Hawai‘i program. Courtesy of Juniroa Productions and Heather Giugni

Once on the Mall, Festival participants from Hawai‘i addressed such topical and pressing issues as sovereignty, cultural diversity, and tourism from the front porch of the “K. Awa Store” narrative stage. These discussions and the cultural traditions shared in performances and demonstrations during the Festival never failed to surprise program visitors. One woman who attended a Korean dance concert commented that she had never seen performers like these on her visits to Hawai‘i, and therefore surmised that they must have come from “the other side of the islands.” For those of us working on the program—organizers and participants alike—this phrase became the program tag line we had been looking for. Even as seven-to-eight million tourists visit Hawai‘i every year, the traditions of the local communities remain strong at home, and visitors to the 1989 Festival had a rare opportunity to see that vitality proudly displayed on the National Mall.

Hawai'i is a complex state that is home to an incredible array of ethnic groups and cultures. Each of these groups has maintained its unique identity and at the same time blended to create "local" traditions that are expressive of the community as a whole. Hawai'i is both geographically and culturally at the crossroads of the Pacific. In this multi-ethnic society, music, crafts, and food all provide important windows into the process of acculturation that occurred in Hawai'i. The acculturated traditions that make up what people in Hawai'i refer to as "local" are the result of adaptation to ever-changing circumstances. At the same time Hawaii's ethnic communities have retained and developed their individual identities that are expressed in the vitality of their traditions.

In the two centuries since contact with Western culture, native Hawaiian traditions have been subject to tremendous pressures. Some ancient artistic expressions dwindled completely, while others continued. These losses were the result of a combination of factors including the loss of a functional or ceremonial role for many goods or services. In the wake of massive dislocation of people from their cultures as well as from their land, and in light of the ethnic mix that has resulted, it would seem that little would be left of Hawaiian or even Japanese or Portuguese identity in late 20th century Hawai'i. On the surface this is true. Especially since World War II and statehood in 1959, mass media, tourism (five million visitors a year) and the strategic position that Hawai'i holds in the Pacific have made it difficult for the islands to remain isolated from either mainland. However, even the casual visitor to the islands - or to the 1989 Festival program - could observe that the people of Hawai'i have learned to live with each other while retaining attitudes and (especially in the past two decades) revitalizing institutions and traditions that reflect their ethnic identities. At the same time, cultural borrowing in Hawai'i has been extensive and the state's rich cultural mix is a source of pride for all its citizens.

Increasing pressures from foreign investment and mass media are today further disenfranchising native Hawaiians and threatening the stability of several generations of other cultures in the islands. Hawaii's characteristic attitude of tolerance and acceptance, molded in part by centuries of isolation, may be compromised by such pressures. These attitudes and Hawaii's fragile artistic traditions are inextricably tied together. Preserving these arts was seen as crucial by the Smithsonian and its Hawaiian collaborators, for a community's psychic well-being is only as strong as its commitment to protecting its traditions.

The Festival was produced by Bart Fredo and PBS Hawai‘i in 1989. The film is narrated by Nalani Eilson-Ku and includes interviews and performances recorded at the Smithsonian Folklife Festival in Washington, D.C., and in Hawai‘i. Courtesy of PBS Hawai‘i; special thanks to Roberta Wong Murray

Celebrating Hawaii's Cultures was produced by Juniroa Productions in 1989. The video is narrated by Honolulu Skylark. Producers Heather Giugni and Lurline McGregor created it from material recorded entirely on the grounds of the Smithsonian Folklife Festival in Washington, D.C., and the credit roll provides a list of all the crafts people who participated in the 1989 Hawai‘i program. Courtesy of Juniroa Productions and Heather Giugni